It’s difficult to teach these puppies when they are in multiples, they spend most of their time fighting and playing with each other.

Yesterday evening took my second dose of rabies injection and after office when I went to meet them I was surprised to see their mother sitting there only, usually she doesn’t sit with their puppies.

She looked tensed and scared. I guessed it from her hiding her tail between her hind legs and looking sheepishly to me. 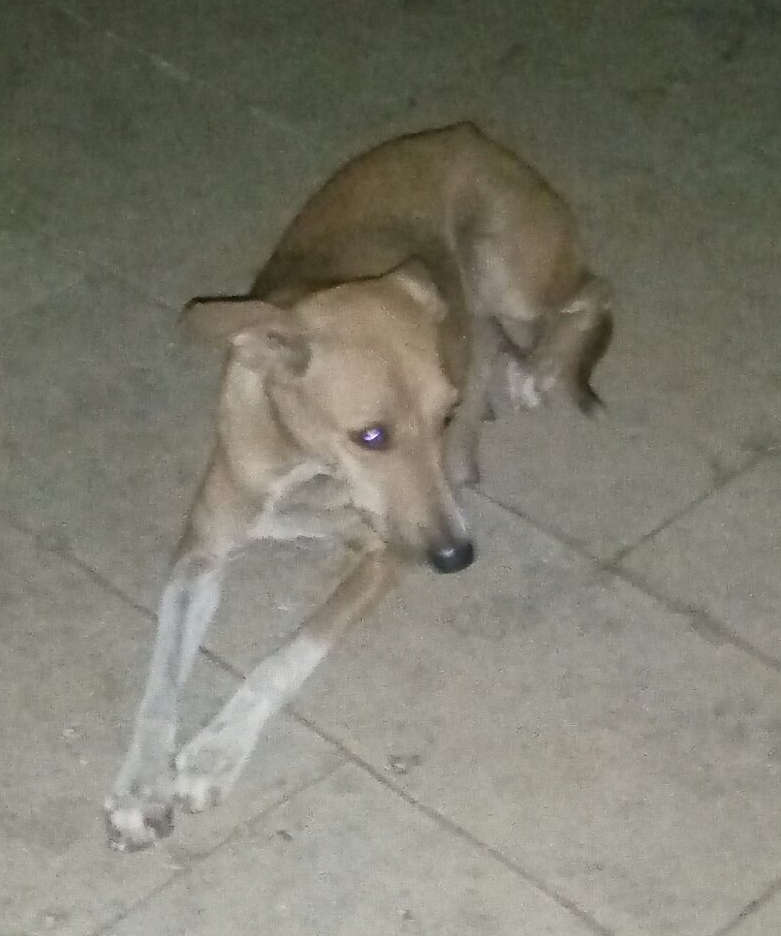 Though I made her a bowl of bread peices with little milk and water. She did come to me and ate when I offered her the food. Seems she was pretty hungry and she finsihed quickly, I almost gave her 2 bowls to eat which she happily ate.

Once she left her puppies joined back. On another bowl I had given her puppies the same thing which they were eating and playing. 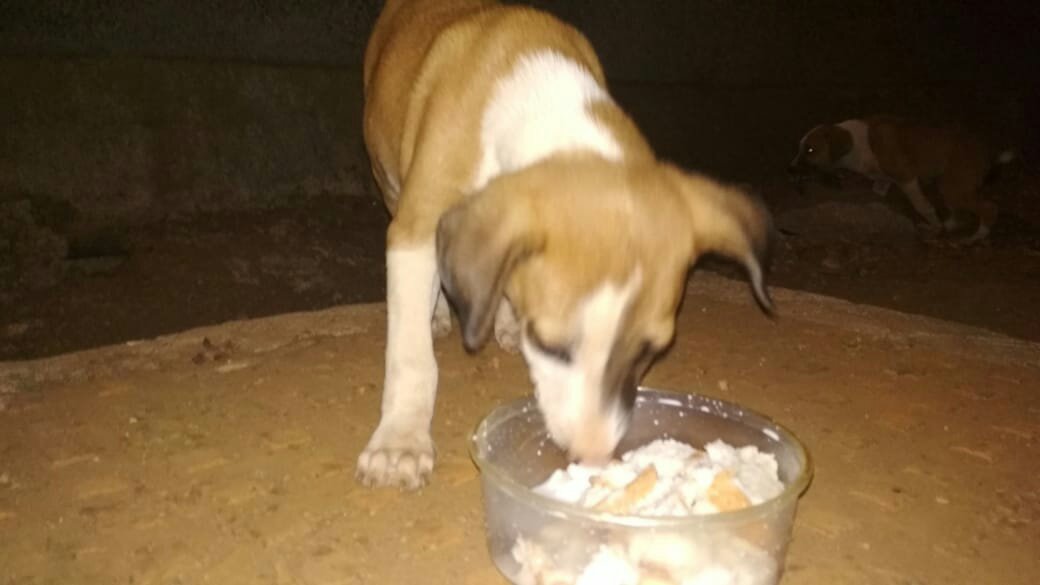 Since I was a little paranoid of germs, I wore a plastic gloves so I do not contaminate myself while touching them, somehow I felt that these puppies understand this is something else touching them and was not coming back again to me. They must have sensed I am not showing complete love to them and must have thought that my touching them could be a threat.

They too are one bowl. Which means a bowl for 5 puppies and one and half bowl for the mother of the puppies.

When they saw me with bowl they jumped and came close to me, but once they had their meal, they were just ignoring my commands and kept playing among themselves mostly sleeping. 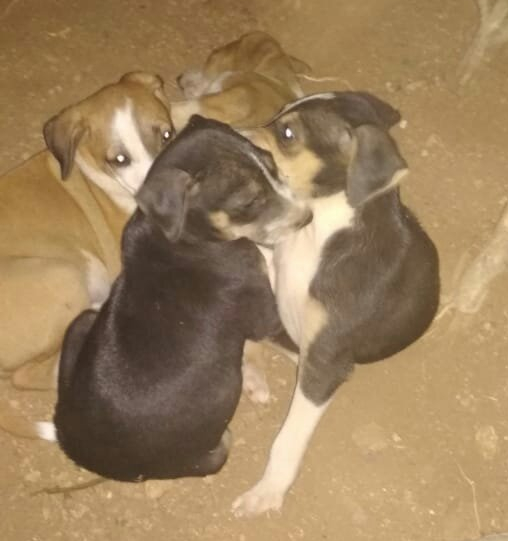 During the first time I am sure to see another dog seating on the wall watching me giving food to them, the mother could be scared and terrified of that dog, I heard some barking too and she even ran to protect them.

I tried to get individual snaps for each of them so it’s easy for me to recognise and name them, but they did not stood silent and always running here and there and when I tried to hold them they tried to bite me too.. that was a little scary, but I did not pushed much. I think they are still getting accustomed to me. 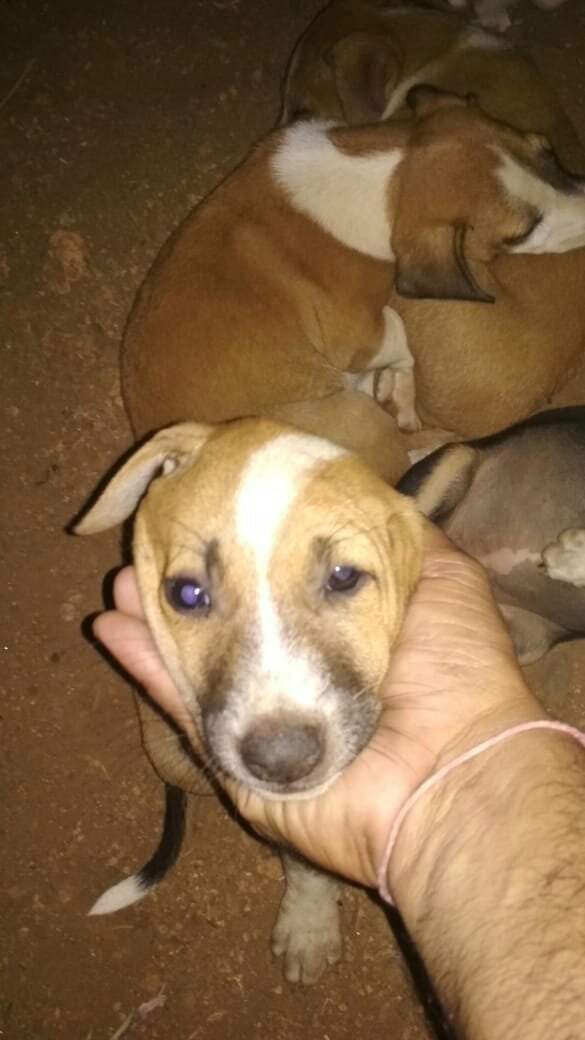 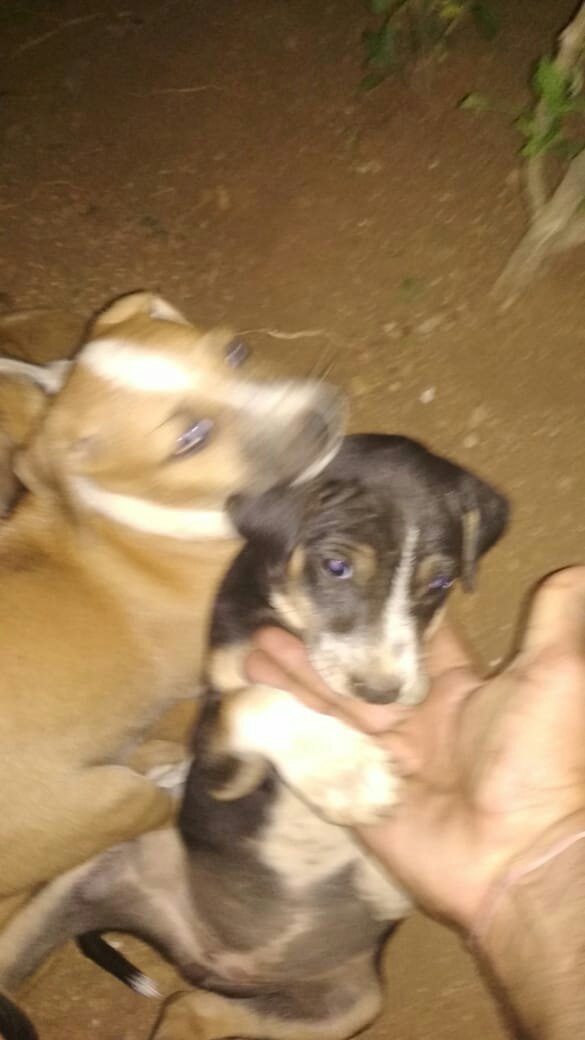 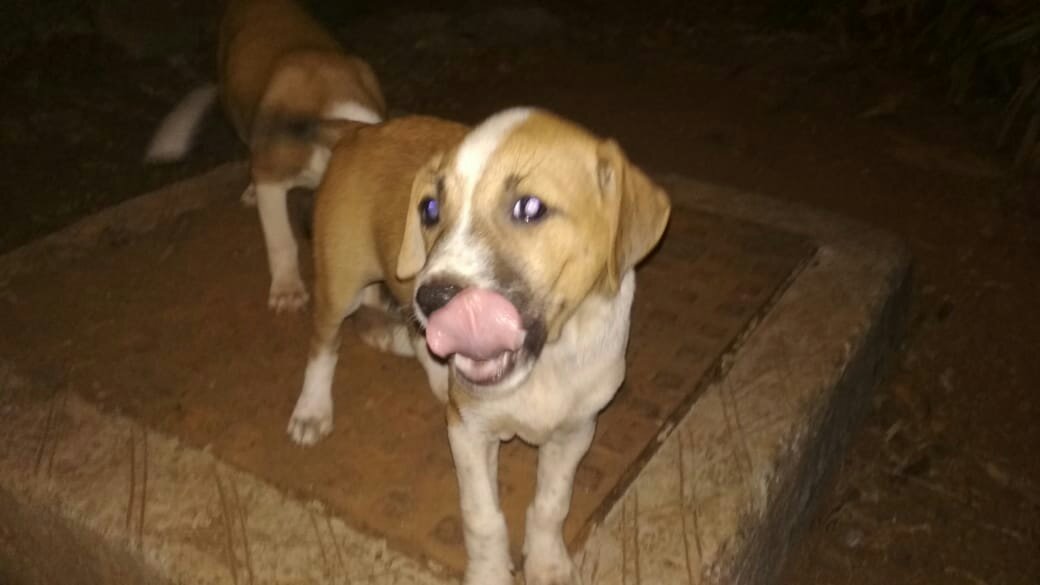 bruno licking after his meal 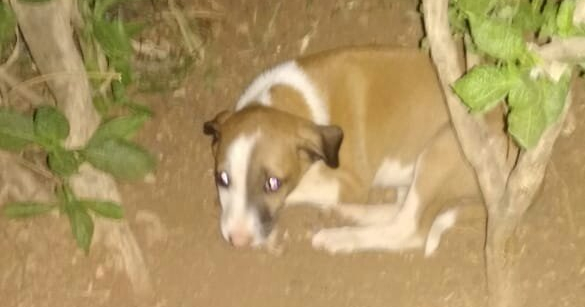 he is pretty scared of me.

Only two of them actually are ok with them being held Bruno and Blacky, pics above.

Later that night I went with a banana figuring they like from my previous feeding to them but I couldn’t find them. I even tried to give the banana to the mother who was strolling around she even didn’t took it. I assumed they may be not hungry and left the peeled 🍌 in the bowl.

After feeding them earlier I went again to see them but was not able to see them around even after my calling they didn’t appear. I felt a lil sad and someone told me their mother took them to hiding some place. Anyways I saw the mother she looked scared and terrified and was even afraid to come near me. I slowly tried to console her. Later when she got comfortable I left. But the the puppies were not around and that was heartbreaking. 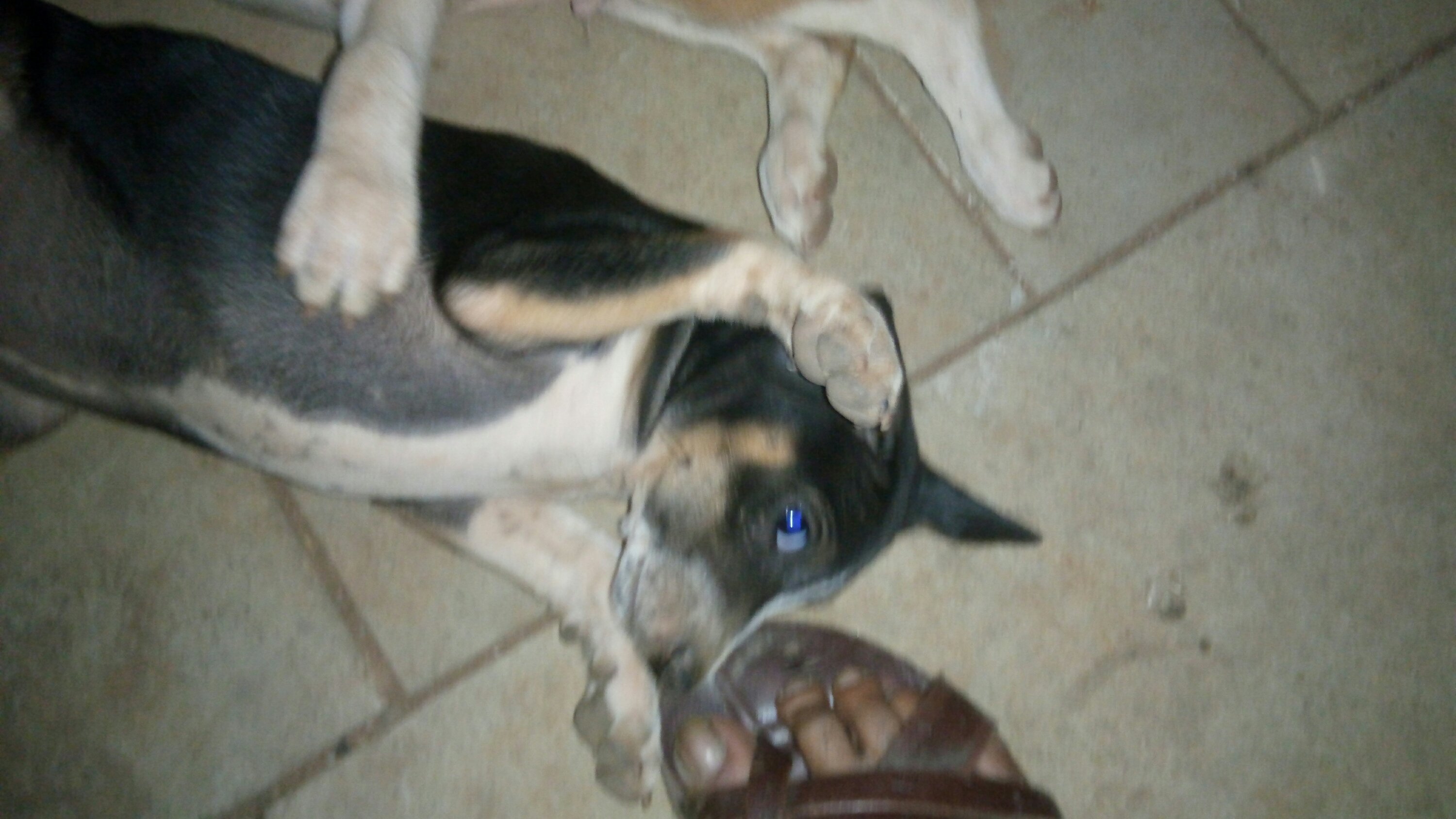 blacky so happy to lie on my feet, both blacky and bruno lying on my feet. 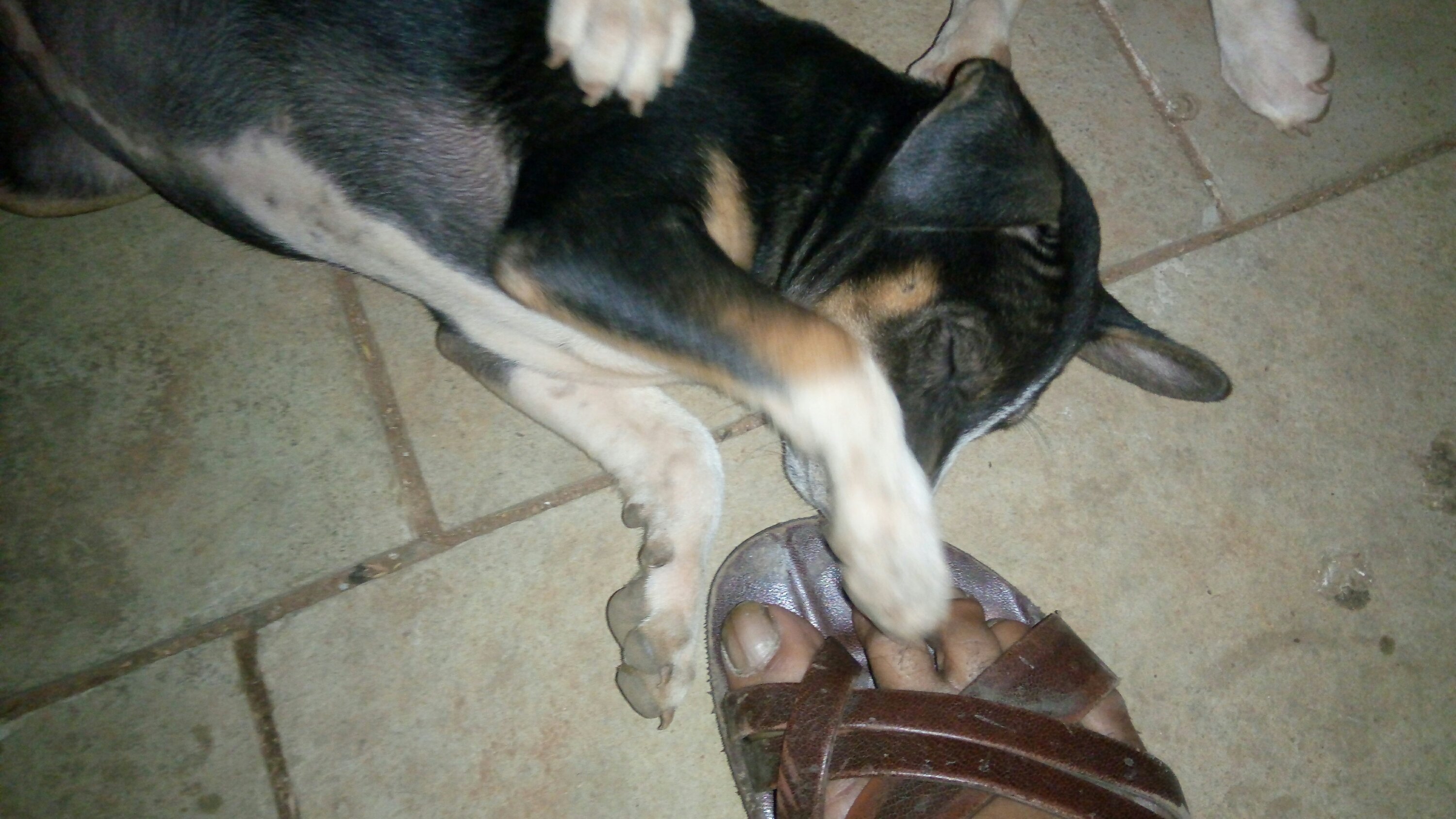 blacky so happy to lick my feet.

Well I was feeling bad for them missing and went again later at night to check on them around after 2 hours and was glad to see them again around. Bruno and the blacky did come to me and lapped and licked my feet. I was so happy I did held them in my arms. And they were happy to be held too and me too. This time though I didn’t took my gloves and caressed them with my bare hands. 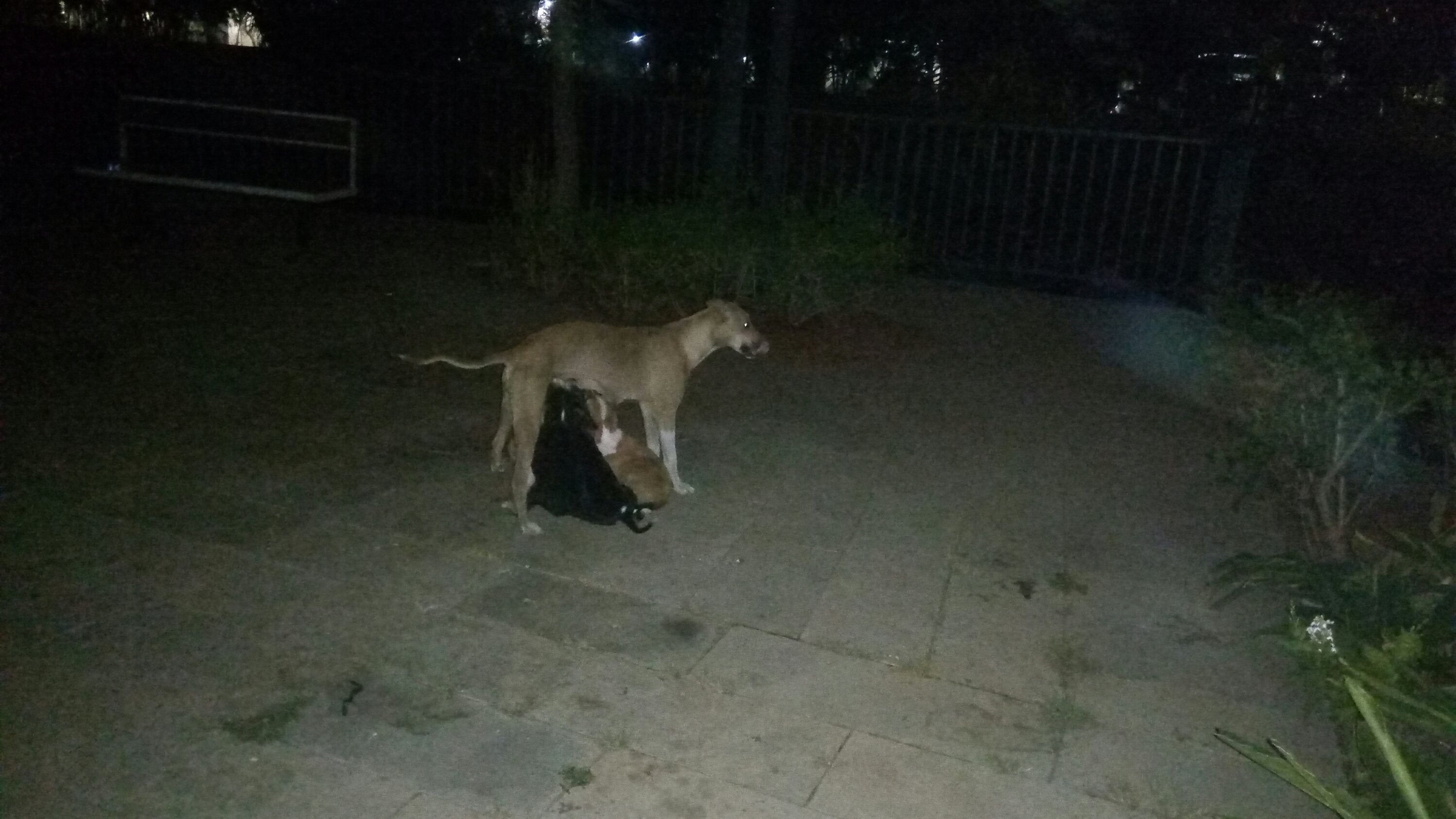 pups being fed by their mother

Later when their mother came they were all into her. I just clicked this and left.

A video I Anderson yesterday

Yup they are indeed. The best part is they come to me when they see me. Yesterday night it was fun, had given them Marie biscuits as treat when they were listening to my commands. Read about touching strays so has to wear gloves and all so I shouldn’t get the germs transferred from them, I am being a little paranoid though.

I do like them but in a way I don’t want to carry any dreadful germs to my home. I have 2 kids at home just being a little precautionary.

Washing hands and everything I do daily to cleanse myself, but still don’t want to take any chances.

Look at them jumping to come meet me when they hear my sound. They feel really excited when I am around. This makes me happy. 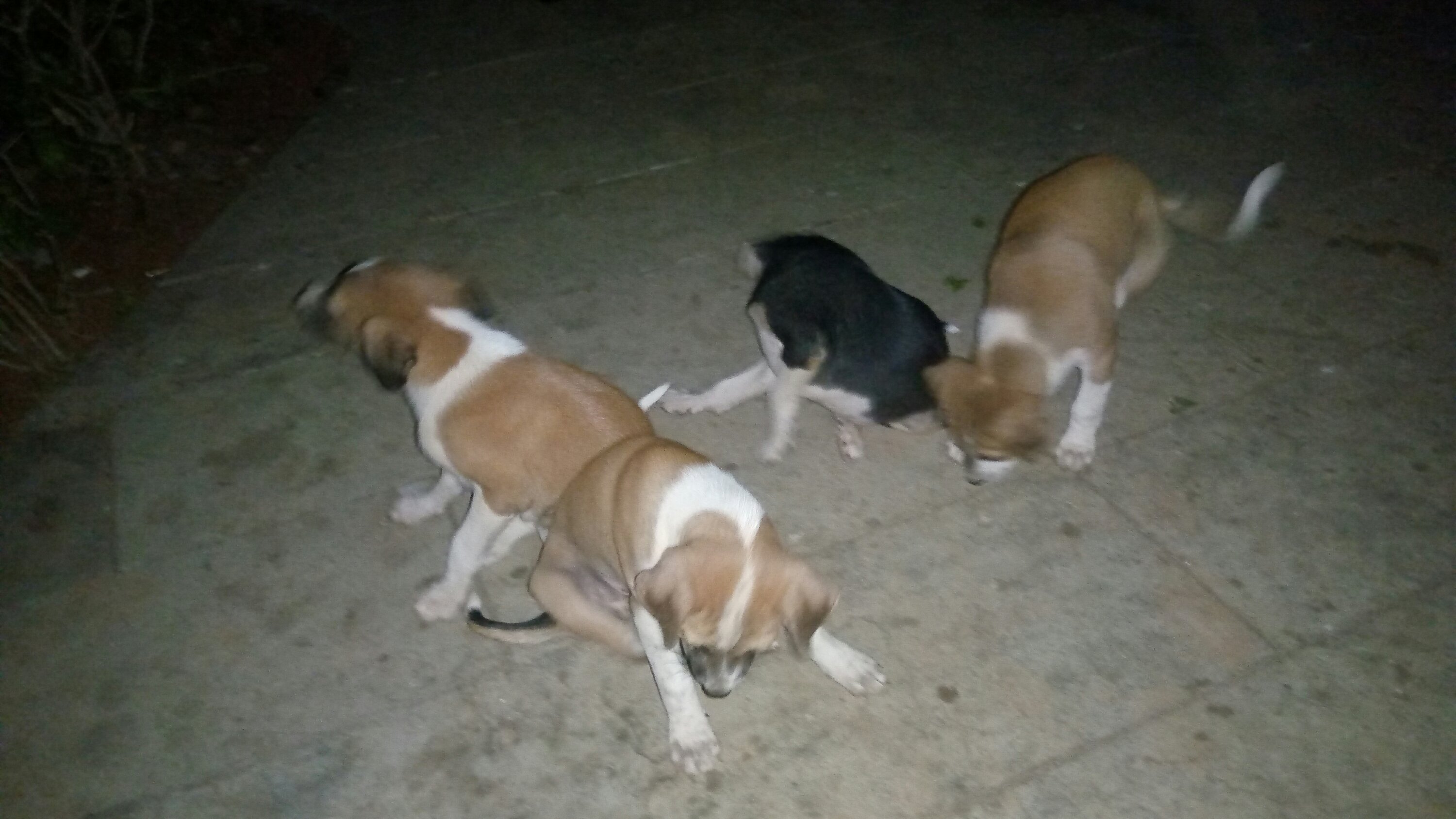 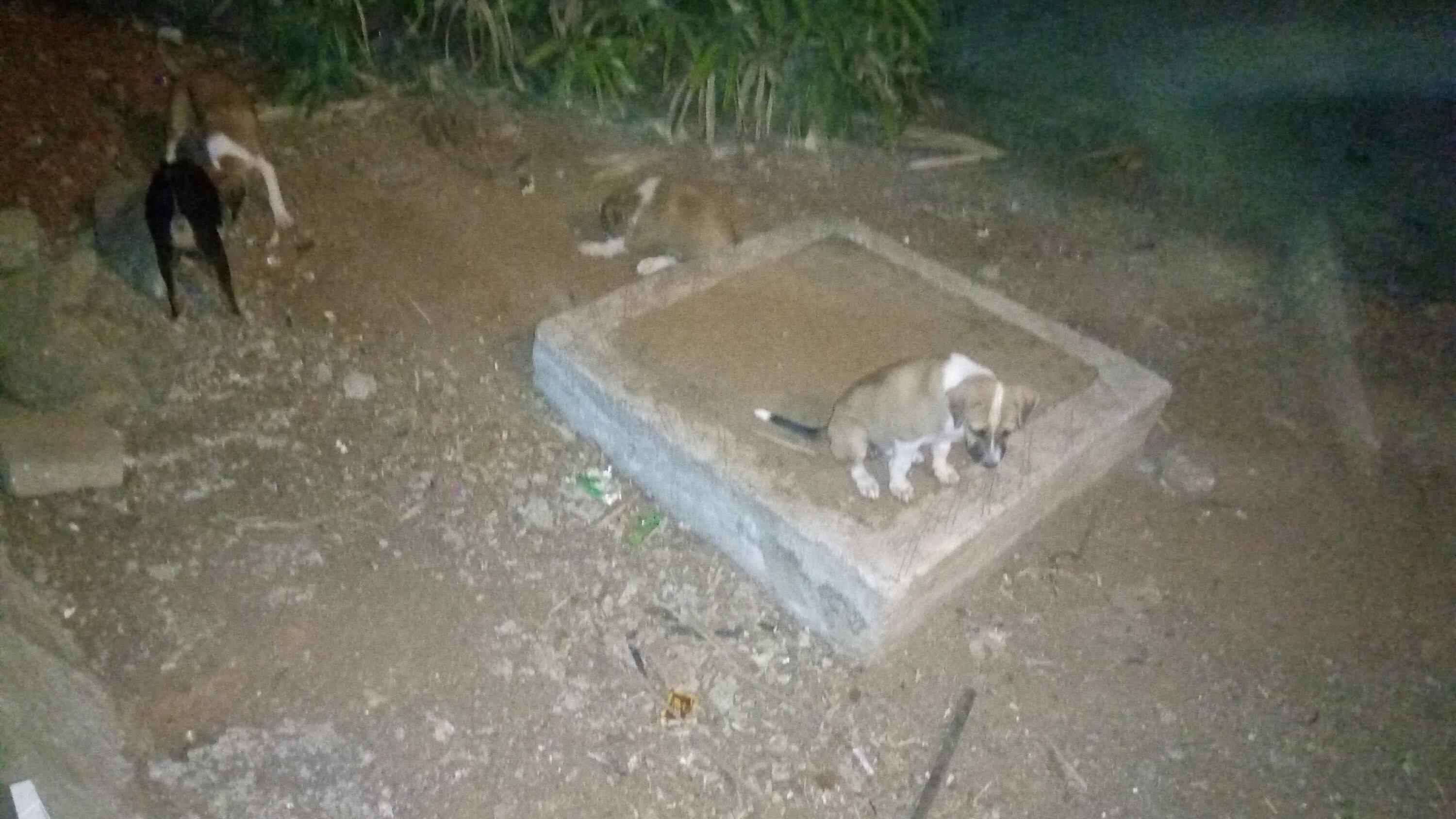 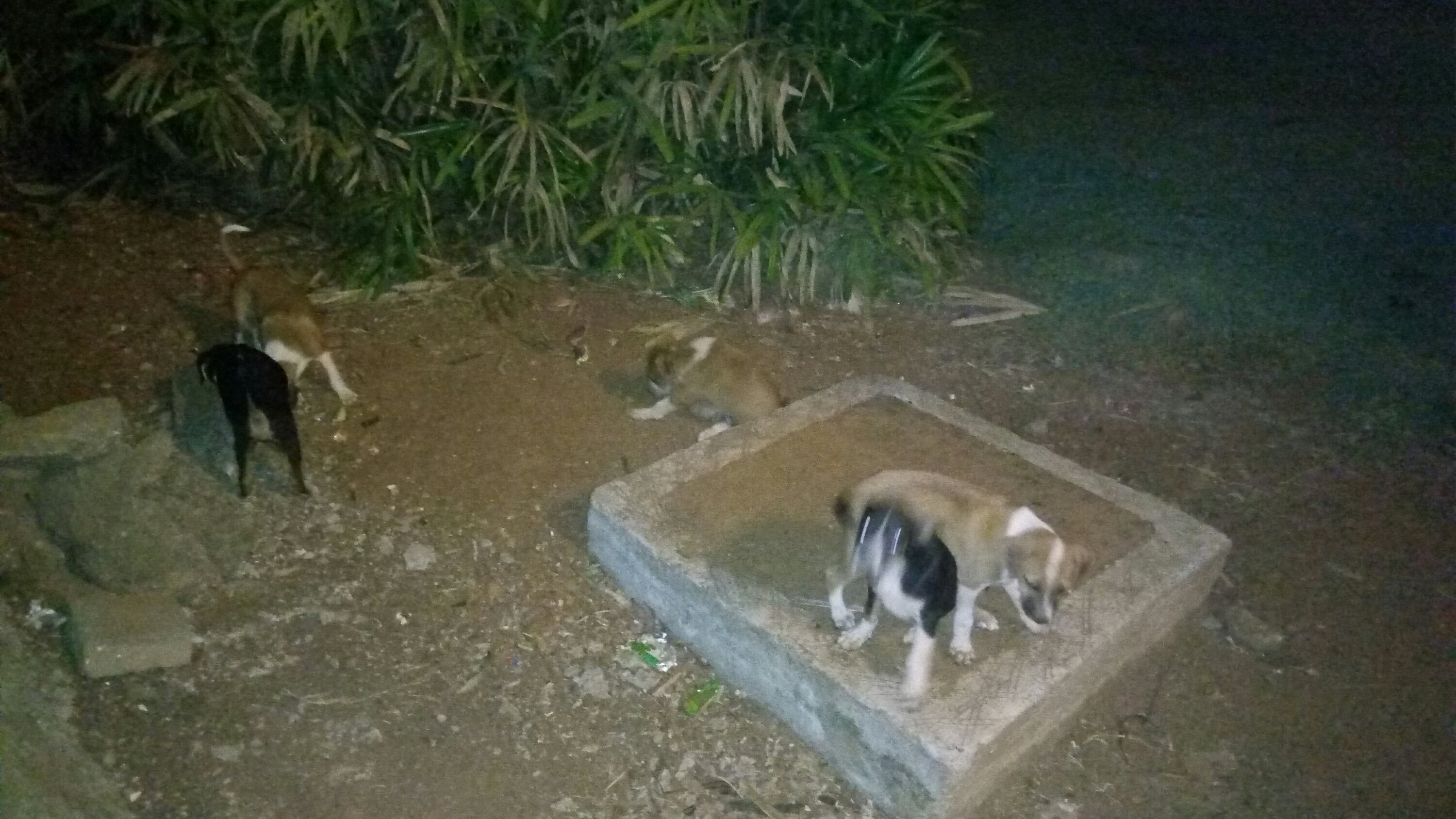 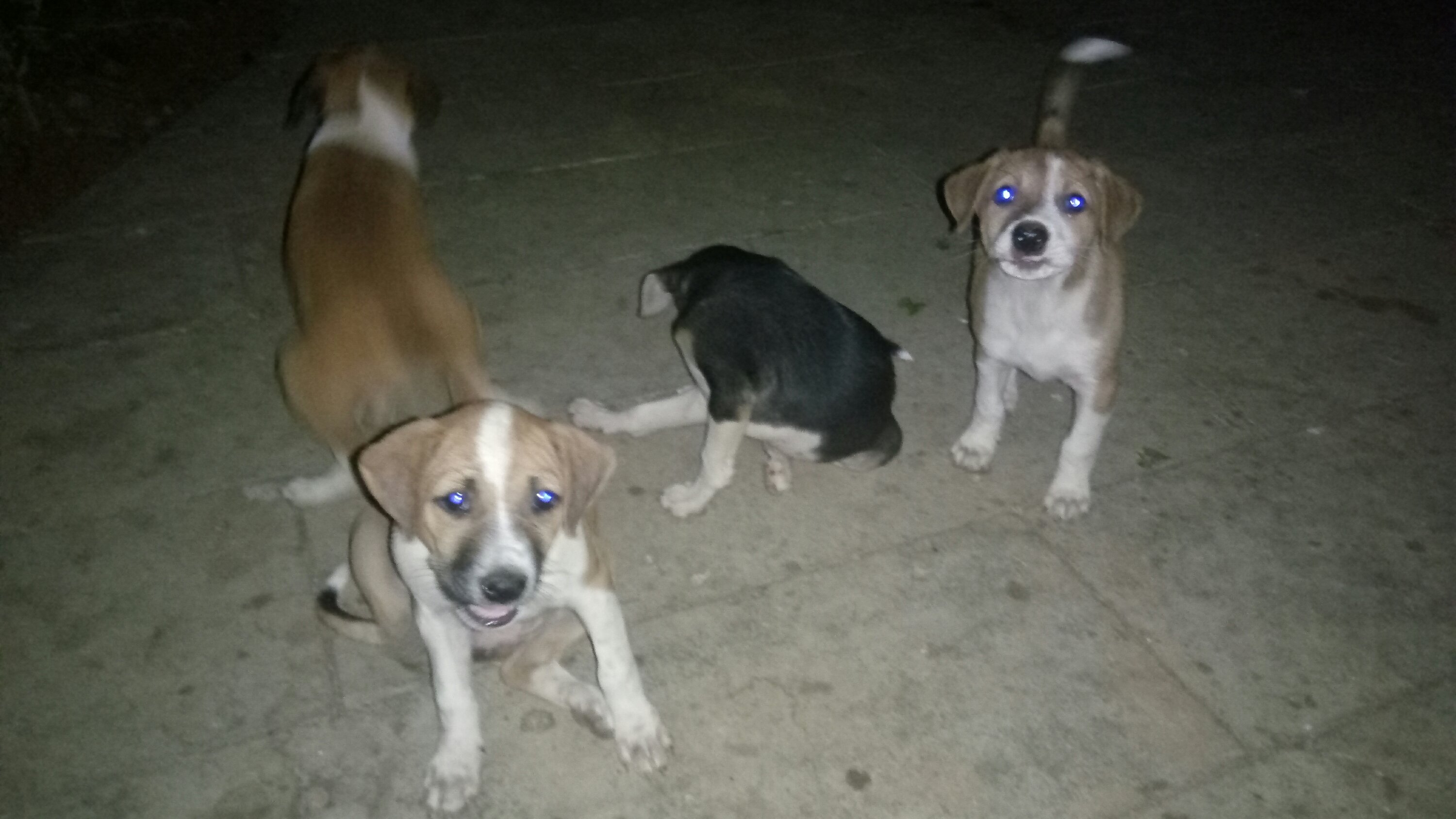 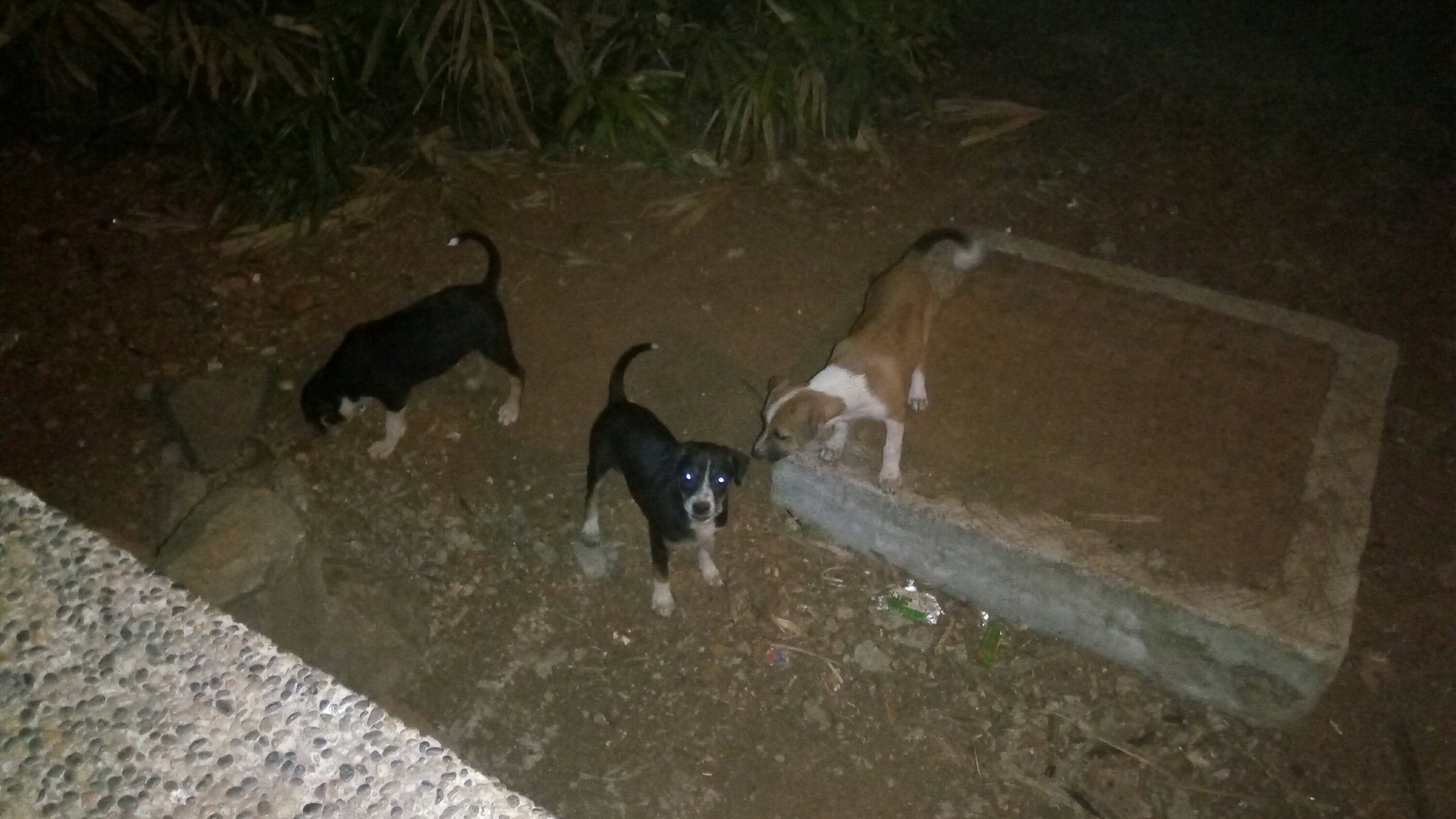 Actually yesterday night while I went to meet them. Their mother was around, which make me a little scared. But later on she got accompanied by me. 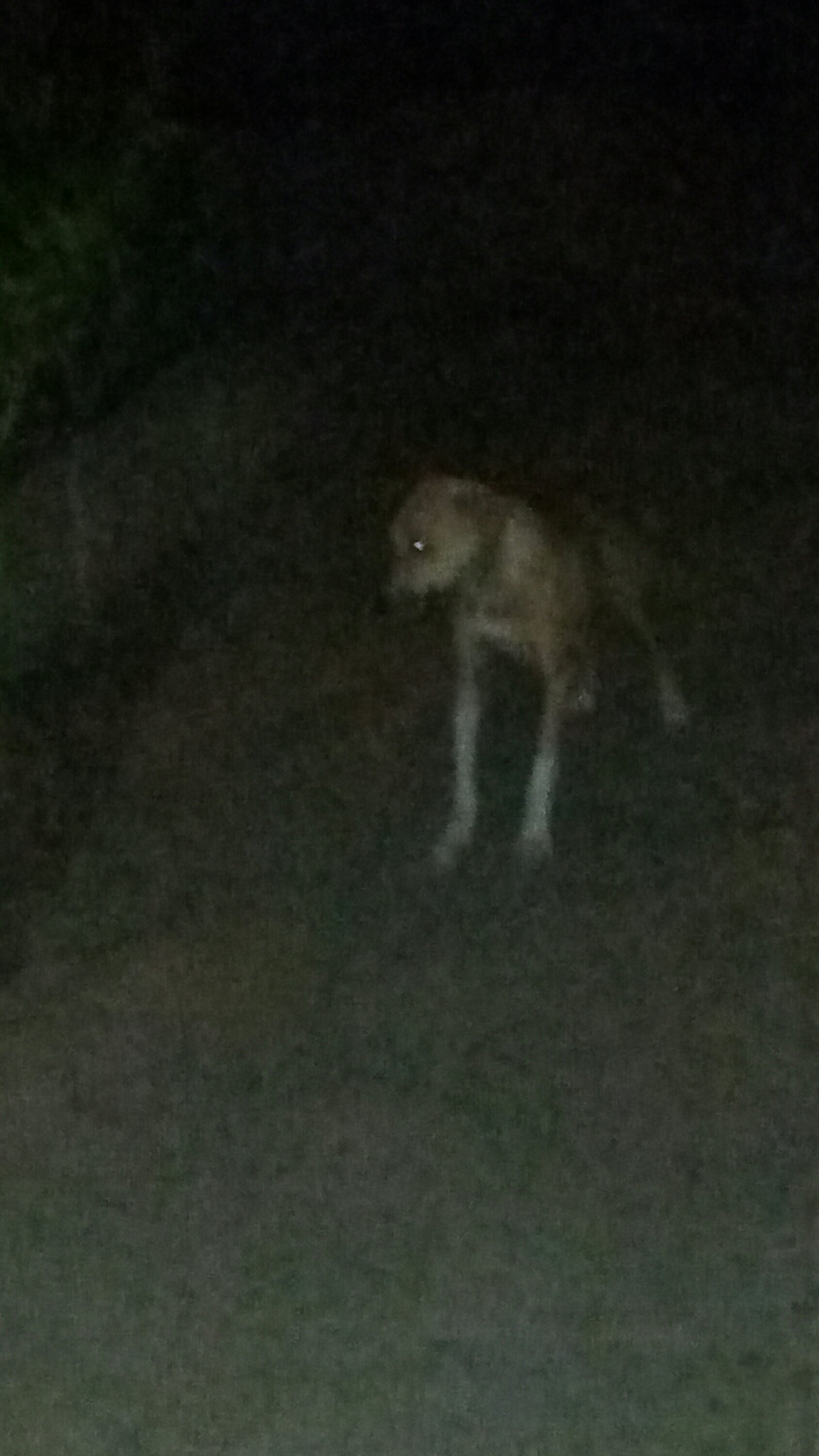 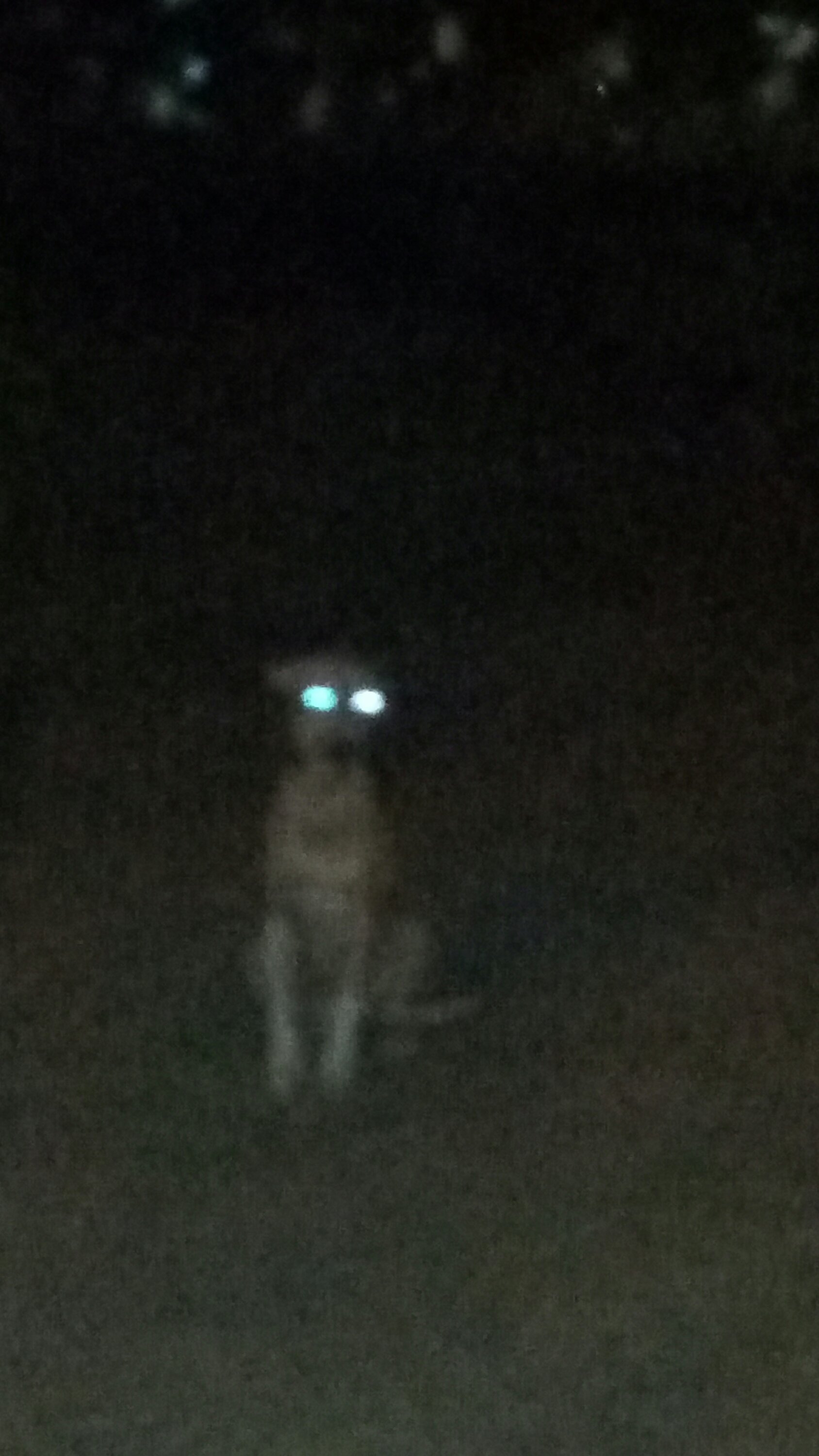 Went again today to see the puppies, got them a banana and carrots, they were pretty please to see me and greeted me well, though I didn’t make any noise today but one one them woke up and came to me which others followed too. 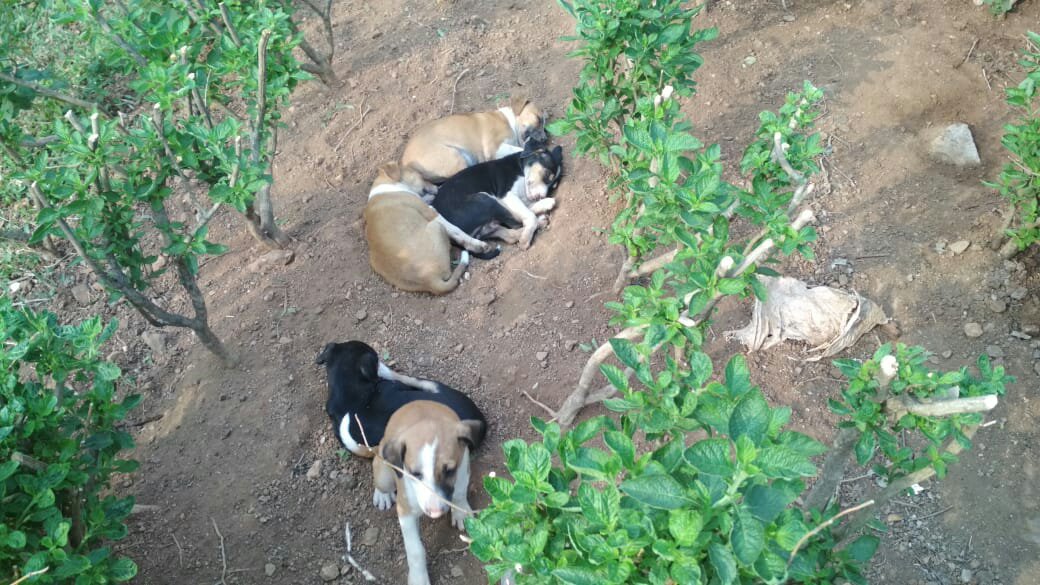 Can see how cutely they are cuddling on each other this is adorable.this one is so happy to see me and woke up immediately when he sensed near me. Since they were sleeping I didn’t make any noise, but he is still able to sense my presence. This is amazing.

In my last post as I have noticed that the mother dog is going to leave her puppies as she is not much around them and doesn’t want to keep them along with her, from last 2 days I am seeing her sitting around those puppies maybe she knew someone is feeding them and she also waits for the food. I also learnt that while there mom is around the puppies refrain to come out… Unless they think that she is calling for them. Otherwise when she is not around they come to me and play with me even listen to my whistles.

I had thaught them to sit and when they sit I am giving them treat. Which they are following but at times the jump.on each other and do not obey, I am sure this is going to take a while it’s only one day that happened.I am also wondering what more can I teach them to listen to me.

They are lovely cute creatures. And from a couple of days I really feel sad when I don’t see them around. Yesterday, when I came to their park in night I couldn’t find them, even after multiple whistles they were not coming and I felt very bad. I tried to locate them, later when I went back again they came running to me. I suspect since her mother was there they didn’t came out, I gave her mother to eat too. Which I had bought for them to eat. I know they are strays and they are always scratching them, I am pretty worried they caught some disease. I need to plan for their vaccination sooner.

For vaccinating them I am thinking of putting them in a crate and take to the vet. But I am pretty worried for their mother she might panic and wail. Looking for suggestions on that.

I also soon need to name them. Would be great if I could get any names.

I am giving little something to eat to these puppies from last Thursday. I found them in my society garden.. 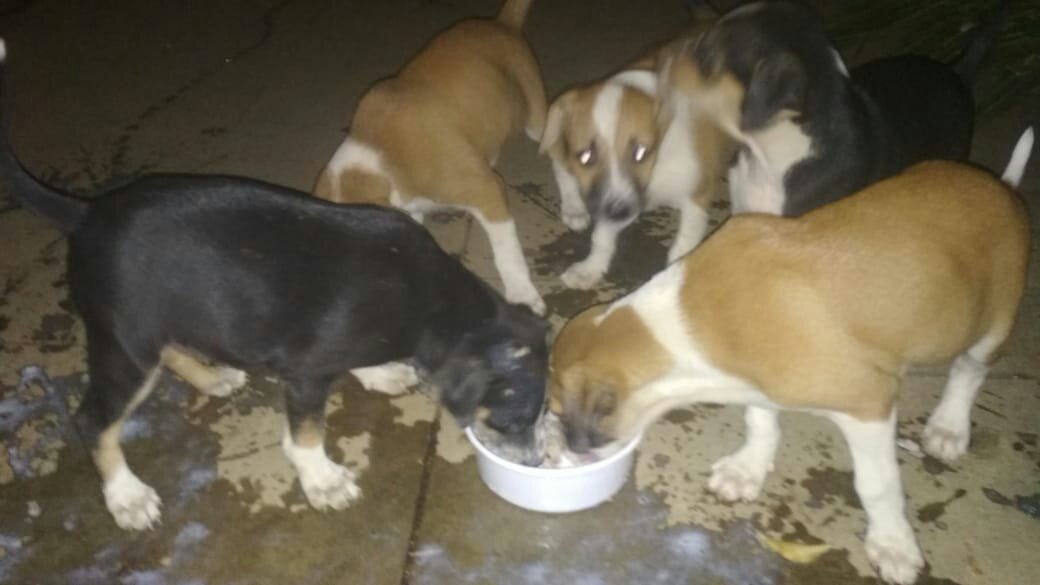 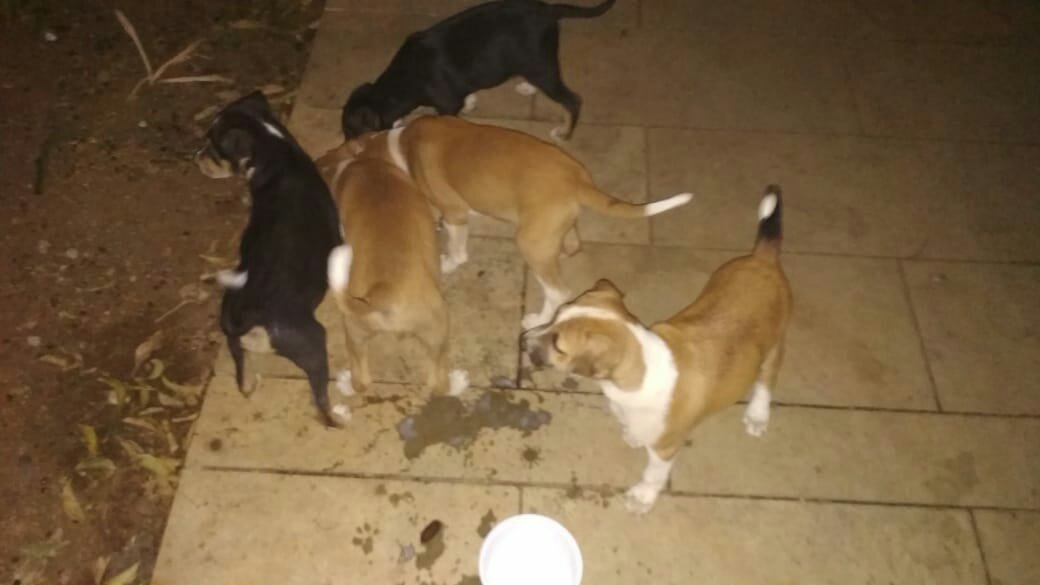 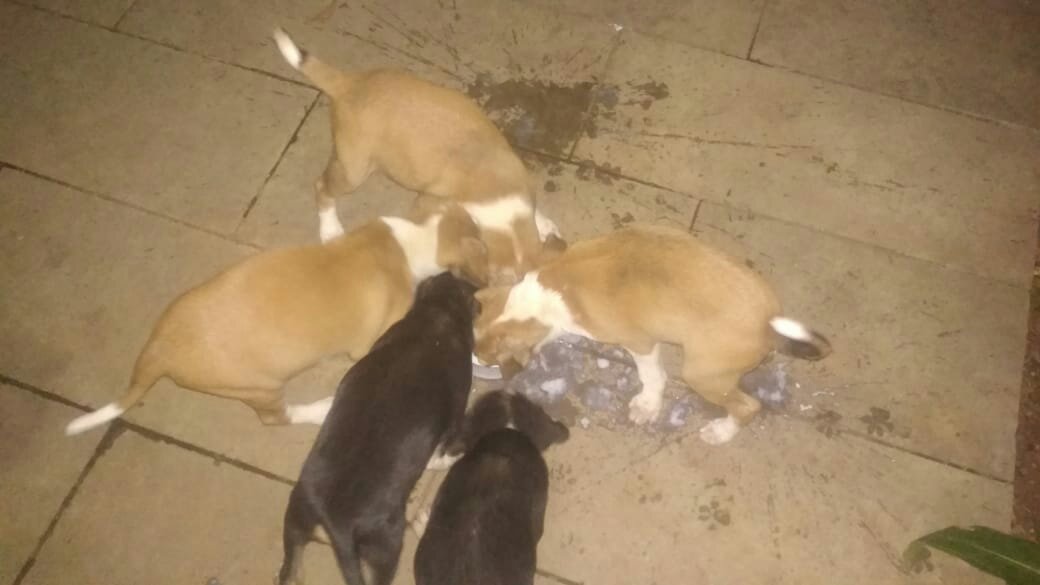 Now whenever I come and call them they come running for me expecting I will get food.

They are start puppies so I am not aware if they are vaccinated or not.

So last Saturday they try to jump on me I mean trying to stand taking my support reaching to my knee height. I got a little scared for being caught by rabies. But there was no visible scratch mark so I didn’t panicked much. The day later i.e. on Sunday afternoon on 10 March I played with them. 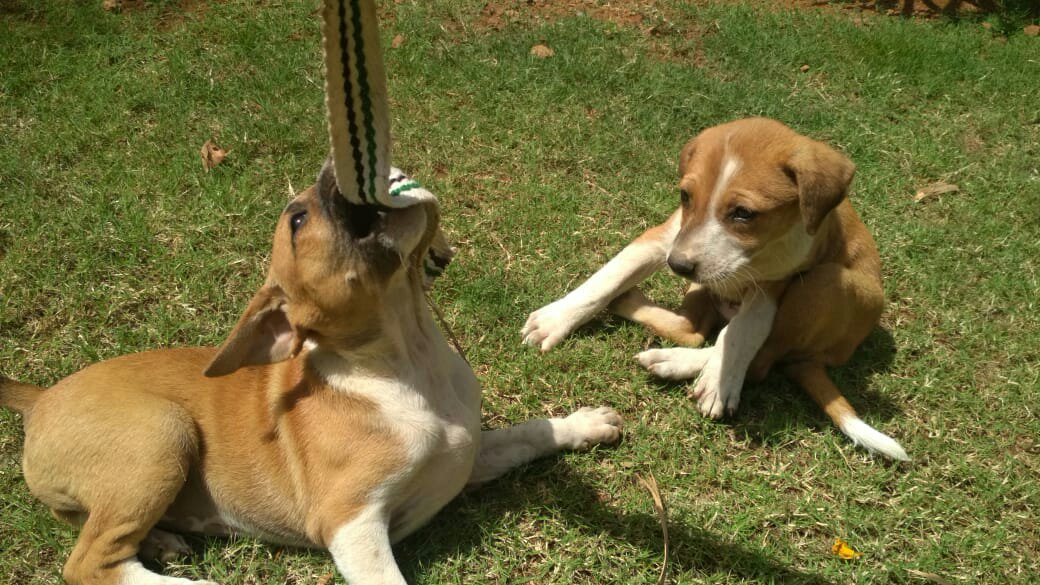 But when I came home I could see a tiny scratch on the back of my middled finger that really made me very cautious, but I was sure none of the puppies had touched my hand also in night when I went to meet them they came to me running and followed me as well, and when they followed me they were able to find their mother who use to hide in my building compound, while seeing the puppies she ran away and the puppies followed her.

This worried me sensing that she might not dump them somewhere as these puppies are not going to cope up with her running.. moreover there are other starts and cars running which may make their survival difficult so I went around to check the puppies and could find one of them scared and running here and there..so I picked him up and dropped him at the park where they were staying.

Now I once again went around to see for other puppies to find they were stranded alone in a car park.. so I made them follow me and again dropped them to the park with their brother and sister.

All in this while handling one puppy he got scared and bit me on my finger not very hard and did not even punctured my skin but I got really worried and today went to immediately get myself vaccinated with PEP and TT. Precaution is always better than cure.